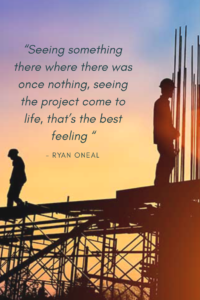 To top off the month of love, we would like to feature the story of  RKO Construction,  owned and operated by two hardworking love birds, Ryan Oneal and fiancé Lyra Poston.

Overall, construction can be a hard industry but if you’re working alongside the person you love, it makes all the difference.

After losing a previous position at a construction firm due to irreconcilable differences with the company, Oneal had to find a means to maintain his family. He had years in the industry and decided to keep doing something that he was good at.

RKO Construction was built without a plan. It was built out of a necessity.

It began as a simple door frame remodeler in Mesa, Arizona in the fall of 2018 and has since moved up to becoming a full construction company, building anything from barns to houses and other properties.

“For us, keeping our word and making sure we give a quality product is most important,” said Oneal, co-owner of RKO.

After receiving three consecutive loans from Global Business Lending, they have been able to scale the business, sustain their family and pay their employees – which can be difficult for a construction business that must wait for final client payment to satisfy all other job-related obligations. 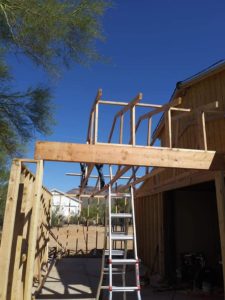 “We started with just me and four guys and now we are up to six guys,” said Oneal. “The worst feeling is getting material and being almost done with the project and not being able to pay the workers.”

“Lyra and Ryan were very prompt in their responses to our request for documentation. They efficiently communicated a specific need each time, which we immediately addressed,” she said. “They understood the concept of timing overall, ultimately lead to them receiving speedy funding each time.”

RKO’s greatest achievement since their quick infusion of capital has been working with other companies such as Callahan Properties in California and 5-star homes, with whom they have a $14 million contract.

“Ryan and Lyra are great business owners and I am glad to have helped them,” said Lesly Larionne, another hands-on Global Business Lending funding specialist. “They were able to use our funds accordingly in their business and see a drastic turn around in a short time.

Much of the reason for their success is how humble they are and how hard they strive for their goal of changing people’s minds about contractors.

Oneal and Poston hope to stand out from among all of the other contractors in their region.

“We want to be the Home Depot of contractors,” said Oneal. “The quality of your work should always exceed the expectations of those hiring you.”

Maria Manzanares contributed to the reporting for this story.

TiffaniRKO Construction Boasts a Love for The Work They Do02.27.2019